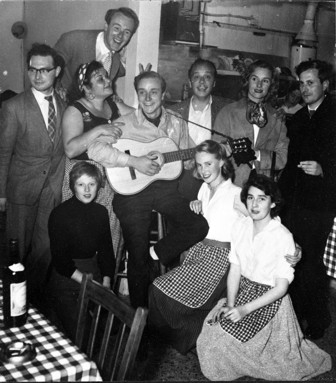 As a child, Luba Gurdjieff fled revolutionary Russia with her family for the refuge of her uncle G. I. Gurdjieff’s school at the Prieuré in Fontainebleau, France. Luba grew up in the vortex of the Gurdjieff work. She had close contact with her uncle, his school, and the community of his students, including many who became leaders and teachers in the tradition after Mr. Gurdjieff’s death.

At the Prieuré and following the closure of the school, Luba met and worked alongside the myriad artists and intellectuals such as Katherine Mansfield, Bertrand Russell, Alfred Orage, and Frank Lloyd Wright who came seeking her uncle George’s teaching.

Luba went on to marry and became known to many as the omnipresent proprietor of Luba’s Bistro, a popular restaurant in the Knightsbridge area of London. Many visited to hear about her uncle. She would say, “Listen, here I can’t talk about my uncle. Here I can talk about food. You come here to eat. If you want to talk about my uncle, you come home when I’m ready.”

By all accounts Luba Gurdjieff was a powerful presence, full of warmth and energy. In the words of Paul Beekman Taylor, “Luba was a godsend. She treated me like her son. She treated everyone about her as family.”

Prior to her passing she worked with Marina Bear, a Gurdjieff group leader, to compile a memoir and cookbook including a recipe for the famous “Gurdjieff salad” served at the Prieuré and at Gurdjieff’s apartment at rue de Colonels Reynard in Paris. The book was published in 1993 by Ten Speed Press. Luba died in 1995.

Luba Gurdjieff’s collection in the GHS archive contains images from periods throughout Luba’s life including the Prieuré with Gurdjieff, Coombe Springs with J.G. Bennett, family photos, Luba’s Bistro, and images from an early Movements demonstration in London. Many of the photos are otherwise uncirculated high-quality images digitized from original negatives.

This collection is available to all members of the Gurdjieff Heritage Society.  If you wish to become a member, you can register here: